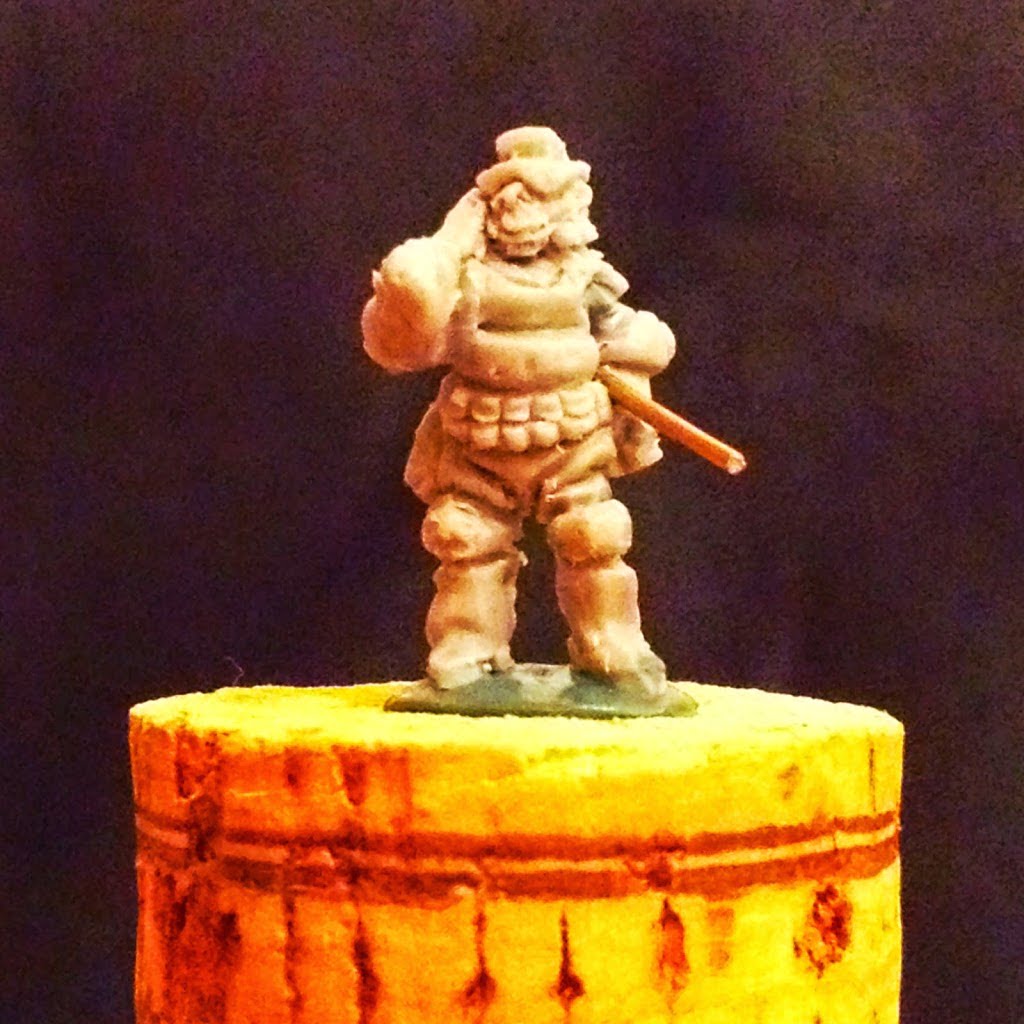 As you know from some of my previous posts, I am a member of the Facebook group “15mm Sci-Fi Gaming“. This is a great group full for fantastic ideas and inspiration. There are a whole load of very talented sculptors in the group who regularly post their WIP’s and new product releases for us mere mortals to dribble over.

Most of the sculptors use Greenstuff (mixed with other putties or as it comes) or Pro-create, and they get fantastic results from them. However, increasingly I have seen people using a product that has, until, avoided my Geek-dar, “Bee’s Putty Plastic”…..

Unlike the epoxies I usually use, this is a polymer clay (so needs to be baked in order to harden) – up until now I’ve avoided these sorts of products as I have previously found them not to my tastes (I tried Super Sculpty – couldn’t get on with it at all!!) – however, ever willing to try new things I ordered a 100g pack of the Bee’s Putty Plastic – Grey (Firm) from the German manufacturer Masq-mini, just to see what it was like.

First things first, I have two little moans to make (I know, I know, I’m usually such a little ray of sunshine) – firstly, delivery time, I placed my order on the 19th January and it didn’t arrive until 7th Feb, this seems quite a wait to me (although it could all be down to Royal Mail, of course!!). Secondly, postage – I paid a flat postage of EURO10.00 – I thought at the time that seemed a little steep for a 100g package, but what they hey, I paid it anyway. When the parcel arrived I noticed that the postage was EURO5.60; now, I know that there are more costs associated with post and packing items than simply the postage (the clue is in the name, after all), but, I admit this did grate a little…..

Anyway, enough of such moaning, on to the product itself. It’s quite hard to describe the consistency of this clay. I guess it’s has the firmness of freshly mixed, warm Pro-create, but with a somewhat waxy consistency that makes it very easy to move around. An added bonus is that it sticks to both itself and (just about) to a wire armature (something I always struggle with when using Pro-create).

After softening it up in my hands (apparently, you can use a microwave, but I reckon TLC would kill me if I tried that!!), I started laying down some basic shapes and molding them around with my sculpting tools. Unlike Greenstuff or other epoxies, because the polymer clay never dries out (it will eventually of course, but not for a long time) there is no rush to get things in the right place. Also, unlike my work with epoxies, I found that, rather than adding layers to the sculpt to create details, it was easier to add a larger amount of clay and sculpt away the excess (if you’ve ever tried this with epoxies, you’ll know it can be a right pain the in the proverbial). Bee’s Putty really lends itself to this sort of treatment as it is so easy to move very small amounts of the putty around, without disturbing the rest of the model (if you’re careful, and not a ham-fisted idiot like me……).

Anyway, I though that it would be a nice idea to give this new product its maiden outing by being used for the GURPS character of a very good friend of mine, with whom I Roleplay most Tuesday nights. The characters name is Nicholas Rouke “Drift” (forever after to be called “Little Nicky”), he is the resident sniper (and arsonist – Damn those GURPS Disadvantages) of the “Lone Wolves” mercenary group (Yes “Lone”, all six of us!!). I had already made an armature to use for this project, so I would not have to waste any time when the clay arrived. I didn’t know at the time that it stuck (just) to a wire armature, so the one I made had been given a thin layer of Greenstuff, just in case.

Applying the putty, as described above, and after only and hour and a half of work, I had this…. 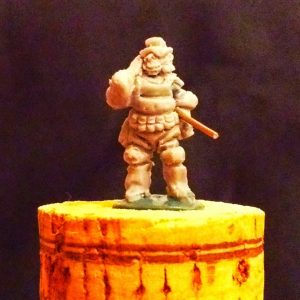 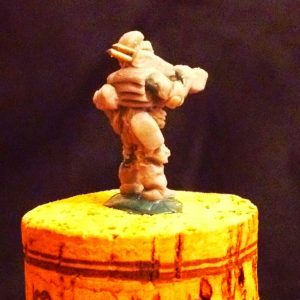 I know, it looks like something from “The Planet of the Apes”, the point I am trying to make is that this stuff is fast to work with……

And of course, the main advantage of a polymer clay over epoxies… I was able to come back to it the next day (and in better light – damn those energy saving light bulbs), and after a couple of extra hours ended up with this: 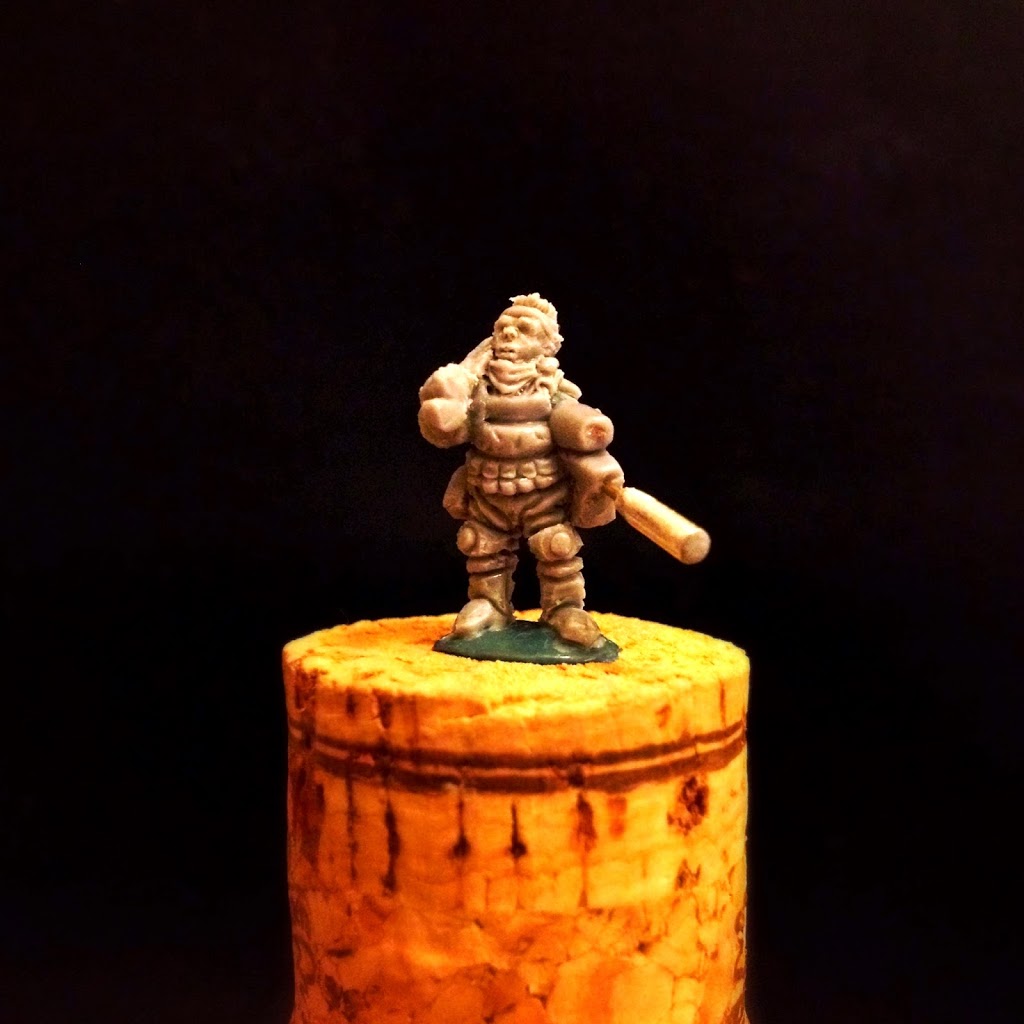 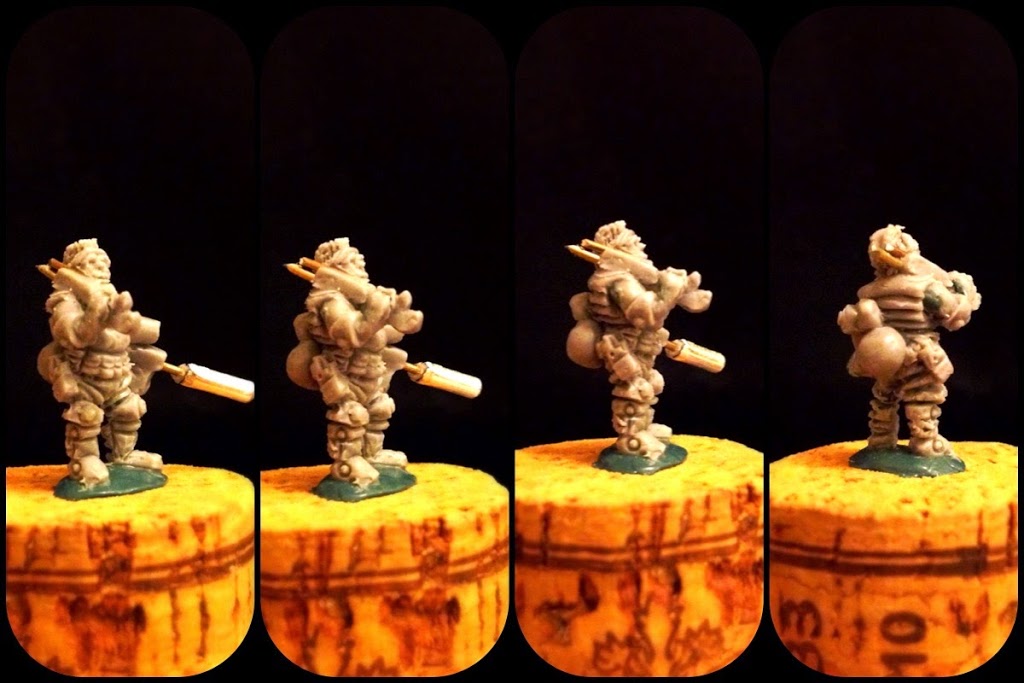 Now, there were a couple more details to add, which I did in short order, and it was time for baking. As anyone who has ever tasted my cooking will tell you, it’s a pretty hit and miss affair (usually miss, I’ll concede), but I was hoping for the best when I set the oven to 125 degrees centigrade (don’t get centigrade and Fahrenheit mixed up at this point – it won’t end well) and my timer for 20 minutes.

When the timer rang and I took the miniature out, it had a slightly glossy look to it (I guess the thermo-plastic was still setting), this soon turned to a very agreeable matt finish. I had somewhat mixed emotions at this point, whilst I was pleased that the clay had set hard (and hadn’t cracked or peeled away), I noticed that some of the lighter details had softened quite a lot (almost to the point where they had been lost compared to the uncured version – I’m not sure if I did something wrong, or if this is expected – the manufacturers instructions or website don’t elucidate on this issue, which is a shame…… I guess I’ll just have to make the smaller details more pronounced next time)

Anyway, here is the finished sculpt after cooking….

Overall, I was very happy with how “Little Nicky” came out and how the product performed (other than the teething troubles above) and I plan to use to again very soon, In the meantime I hope you have found this interesting.

I’ll keep you all updated with how I get on.