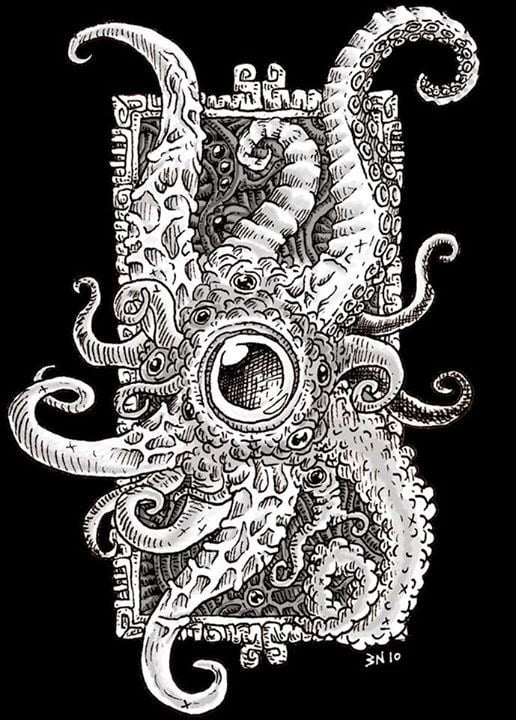 “There, in the grey beginning of Earth, the formless mass that was reposed amid the slime and vapors. Headless, without organs or members, it sloughed from its oozy sides, in a slow, ceaseless wave, the amoebic forms that were archetypes of earthly life. Horrible it was, if there had been aught to apprehend the horror, and loathsome, if there had been any there to feel loathing. About it, prone or tilted in the mire, there lay the mighty tablets of star-quarried stone that were writ with the inconceivable wisdom of the pre-mundane Gods”

A few week ago, the esteemed Mr John Lamb, long term resident of the Facebook “15mm Sci-Fi Gaming” group (if you’re not a member, go and join it now!!) and all round “good egg”, posted a contest on the group page, you can see the post here. The above text is the intro to the post which first drew my attention, I don’t recognize it, so if anyone can tell me where it’s from I’d be grateful (I’m suspecting H.P. Lovecraft, but that’s really not my area of expertise)

Basically, the competition wais to sculpt a huge oozy, shambling, pseudopod wielding mound of eyes, teeth and gaping maws. It was open to anyone in the group, so I thought “why not”.

1) Size appropriate to scale: no bigger than 32mm by 32mm (around twice the height of a figure in 15mm)
2) Must show WIP photos as well as a final picture with a 15mm figure for scale reference.
3) Start date 1st Feb, with the deadline for entries of the 28th Feb

A few pics were also included for reference/inspiration, here they are:

This sort of sculpting is seriously outside my “norm” – other than a single equine based WIP, everything I have done thus far has been humanoid (not always recognizably human, either intentionally or not, but humanoid nonetheless) and as such this was a little out of my comfort zone.

Now as a long time AD&D player (other than the enforced hiatus during my marriage – see here), the first thing that leapt, unbidden, to mind was a “Gibbering Mouther”………..

For those of you that haven’t come across them, these hideous aberrations first graced the pages of a D&D module back in the early1980’s (the Hidden Shrine of Tamoachan) and became a fully fledged member of the Monster Manual a few years later, being a re-occurring feature in each of the successive editions.

sounds like we have our, suitably horrid and nightmarish, puppy, right?

In short, dear reader, no, they don’t (some of the sculpting is certainly horrid and nightmarish, looking back, but the subject matter itself is not), it’s just not my style you see….. I like to think I have a much more of a “cartoony” (even, dare I say in a suitably hushed and reverent tone, “Rogue Trader”) vibe going on – not Manga, certainly; maybe more of a graphic novel feel (often a graphic novel drawn by a hyper-active eight year old ……. in crayon, but a graphic novel nonetheless) – that’s certainly what I have been going for and the look I have been trying to develop over the course of my sculpting journey.

In any event, I didn’t want anything that would infringe anyone’s IP (I don’t know the state of the Wizards IP these days, after their whole Pathfinder debacle), and as such wanted to create something as unique as I could, whilst still being within the original brief.

So, why did I want to be involved in this project? well, there are a couple of reasons really, (1) the Facebook group is really great, unlike several other pages or certain three letter acronym internet forums (especially those dedicated to the works of a particular well known games company), it has a real community feel to it, the discussions are fun and diverse, the people are generally very friendly and supportive and there is no pressure to “be right” or “be the best” – apparently “There is(n’t) Only War” – who knew!!!, and (2) the fact that bragging rights will abound!!! And, at the end of the day, you can’t say fairer than that.

So, without further ado, here is the very start of my project – the armature. This was going to be a pretty chunky sculpt, so I wanted a solid armature. In the end I settled for a couple of small nuts and used wire to support what would be the creatures tentacles (there’s an embarrassing spell check correction just waiting to happen!!) and other extremities away from the main body mass.

The wires were threaded through the nuts and then through the hole in a 30mm washer and into a cork support, this would provide me with a good solid base for the sculpt, as well as ensure that I didn’t stray beyond the 32mm maximum size (you see dear reader, I’m not just a pretty face, “it’s up here for thinking, down there for dancing – and the bit in the middle is just for fun!!”).

Next up, I filled in all the gaps in the nuts with pure Greenstuff to ensure that there were no air pockets, and to hold everything in place when I started to form the actual body. I forgot to take a photo at this stage, so we’ll quickly skip on…… (memory of a gnat, as TLC would kindly say!)

Stage 3 was laying down the actual body mass, and adding a few details. At this point I realized that I had lost my collection of various sized ball bearings in the recent house move (unless Sprout has eaten them, which, to be fair, would probably be a pretty safe bet if I’d left them laying around). Ball bearings are a great modelling tool (when they’ve not been eaten by a toddler), especially for things like eyes (which is what I wanted them for here) or indeed for any item that needs a perfectly round surface (say a face mask on a space helmet, for example – ooooh, now there’s an idea, ooooo squirrel!!). With a quick browse on Amazon, I managed to get separate packs of 1mm, 2mm, 3mm, 4mm, 5mm and 6mm ball bearings for just over a “lady”  for the lot (free postage too – I love Amazon, even if they are a bunch of tax avoiding so and so’s….just don’t get me started on Starbucks!!), the only issue?? – they were coming from Hong Kong, so I would have to wait a while for them to get here.

Not wanting to wait, I figured I could add the eyes after the main body was done, so I set to work sculpting tentacles and “gaping maws” etc, I had just finished watching “Tremors” at the time (what a great film that is, even the sequels are quite fun, after a few beers anyway), and wanted to have that sort of look to the tentacles – I used Greenstuff (mixed with around 10% Fimo and a drop of vitamin E oil concentrate to help smooth things out) for the body. This is a photo of the main body, initial mouths and tentacles in place, after only around an hour of work.

I decided upon Pro-Create for most of the teeth – just to get a different (less “organic” texture to the surface – I find Procreate is better for “harder” textures like this – as discussed in my earlier post on the subject), although it’s a medium I am very much still getting to grips with. Ideally I would have used this for the teeth in one of the main mouths (there are two), but I had done them using my Greenstuff mix (I got carried away) and so would have to make the best of them as I could.

Here is the model with most of the teeth added:

I know, I know, they are not looking much like mouths…. more, rather unpleasant growths on the body, that gets fixed soon I promise. Now, you’ll notice that, as well as the teeth, I added a little extra details here and there. In particular I included a 15mm scaled screaming man trying to push his way out of the creatures stomach – the pouch-like bulge at the back of the model – I figured that something of this size might just swallow its prey whole if it got that chance (especially considering the size of those teeth in that main mouth). This detail helps to fix the scale at 15mm and adds a little of that “horrid and nightmare” quality we discussed earlier (not a lot, I admit, but that’s as close as it gets I’m afraid folks!!)

At this point, I’m sure you’ll agree (assuming you’re still with me – if you are, well done, by the way!!) the mouths just look plain wrong, they are missing the jaw and lip structure that give them their proper shape and currently look more like a rather nasty skin condition. These extra details were added and sculpted, using the same Grenstuff mix noted above, back into the main form to create a nice organic “flowing” feel. Thankfully, one of the packs of ball bearing arrived around this point, so I included a couple of them into the sculpt as well (still 5 packs more to come!!). I think that these two elements make a real difference, they start to make the model come to life and add some of the character to the sculpt that was previously, sorely, missing:

As you can see, “horrid and nightmarish” it is not, the sculpt has a much more “cartoony” feel about it (which is what I was going for after all). You can see that there is some unfinished wire work in the picture above – this is where the second big mouth was going to go. I decided I wanted a big, open mouth for that part (in contrast to the other one with the big teeth, I also wanted to try to get that “Oldhammer” feel to the miniature, so when I sculpted that part I aimed for a Kev “the Goblin Master” Adams look for it (true, I aimed and missed, but at east I aimed!) – here is the miniature after I had done the extra work, and after I had managed to find one of my bags of small ball bearings (the ones I ordered had still not arrived!!)

At this point we are nearly done, I’m just waiting for the final deliveries of the ball bearings to finish it off…… Well, dear reader, that was two weeks ago, and whilst I have received one of the bags, I have also received two more of the wrong size (too big), and the remaining two have still not turned up (I’m not happy!! – damn you Amazon, you tax dodging swine!!)

Anyway, these things are sent to try us, as they say, so I will have to make the best of what I have. The new ball bearings are added, a few more details, a few tweaks here and there and a general tidy up and the sculpt is finished…..

As per the rules, here is a photo of the creature next to a 15mm scale miniature (in this case an Irish Hitman from Rebel miniatures and our very own Olof “Gunnie” Gunnersson).

This was a fun little project to do, and really took me outside of my comfort zone. I hope you like the results.

All the best until next time…….