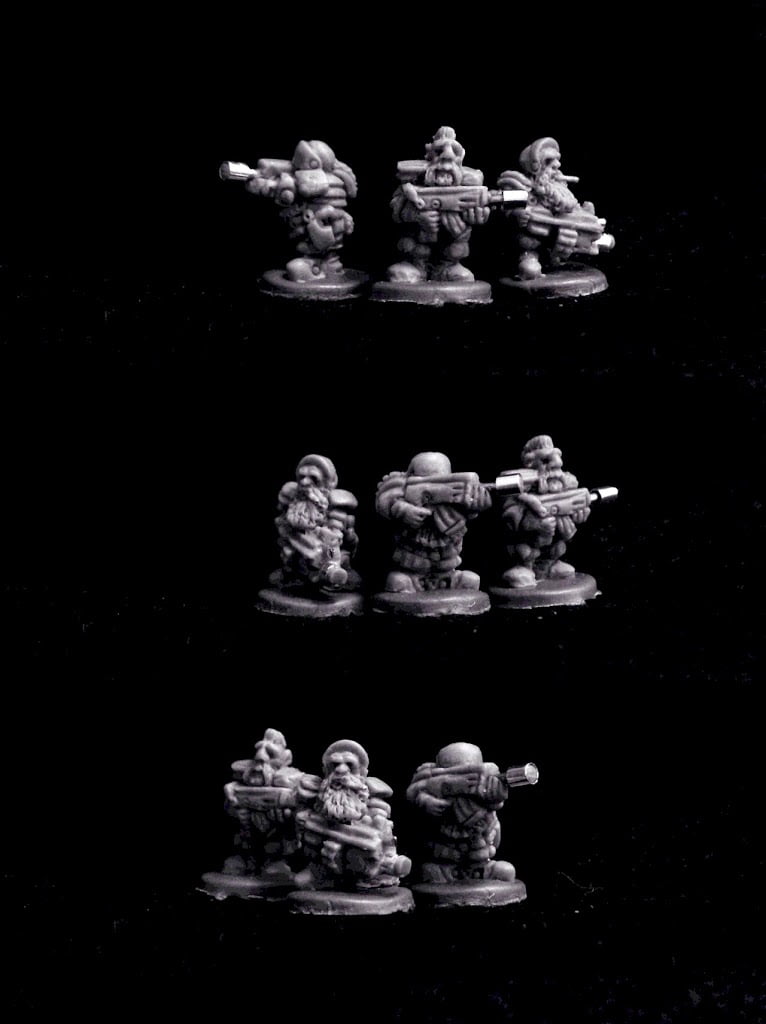 As I hinted at in my last post, things been going on behind the scenes over in Chez FC. Work has been crazy busy, what with trying to sort out a new job, Sprout has decided that sleep is for wimps and I’ve had to have minor back surgery….
However, I’ve been getting a bit of sculpting done where I can, including a project for an actual miniature company….
Yes, you read that right, someone actually wanted to produce something I made.  The company in question is Clearhorizon Miniatures, run be the esteemed Mr Harold and makers of the rather excellent Hell Diver squads of miniatures and other 15mm goodness
You see, it all started after I posted photos of my friends GURPS character, Nicholas Rourke. Mr Harold contacted me to ask if I would interested in sculpting a few figures. In particular some Sci-fi Dwarves. Naturally, I jumped at the chance to have a crack at something like this as it mixes two of my favourite things, (i) the sci-fi genre and (ii) stunties – all blended together in 15mm scale.
When I tend to ask people about sci-fi Dwarves, they always come back to the same thing. A certain, short lived GW race with which the concept seems synonymous. As such, I racked my brains trying to think of a way to make these sculpts very much not just “not-squats”. I didn’t want them to just be sci-fi fantasy Dwarves, I wanted to avoid the idea that they lived underground or built city sized vehicles loaded with interplanetary lasers or that they rode around on bikes and trikes dressed like the policeman from the village people.
When I envisaged this race, I saw them more as jungle fighters; tough, war-weary warriors engaged in a long running campaign on a plush, tropical world – think Vietnam war films like Platoon or Full Metal Jacket, but on an alien world, with very short actors.
Here are the first three sculpts I finished and sent off, across the Atlantic, for approval.
They measure around 10mm foot to eye and are sculpted from Bee’s Putty polymer clay around a wire armature.
These were met with enthusiasm so I completed another 5 miniatures and they followed their brothers across the sea.
As I understand it, they are currently with the caster and will be hitting the shelves soon, keep an eye out and make sure that you pick up a pack or two (or three) when they become available.
All the best
FC