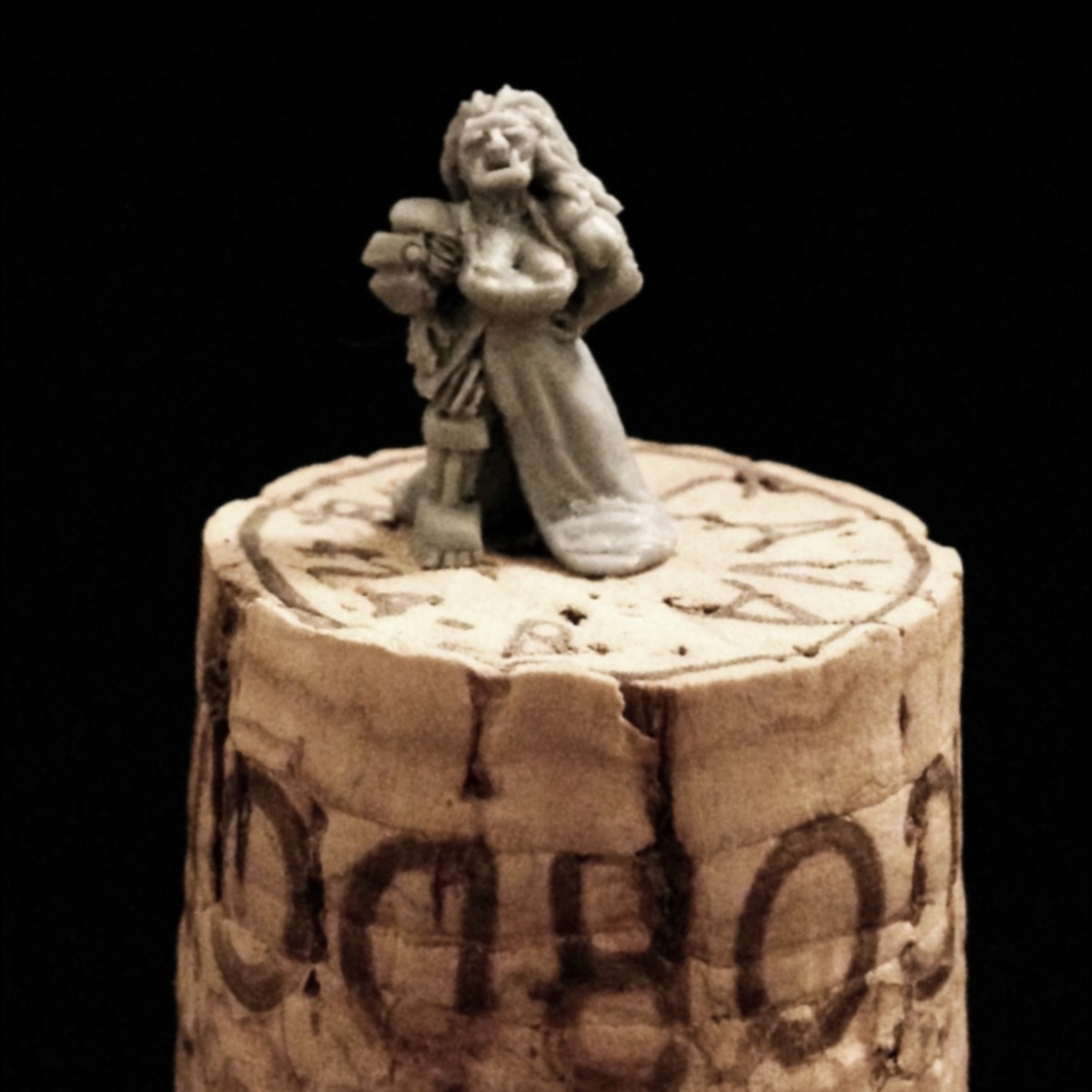 I’ve really been neglecting this blog over the last few months – seriously, I hadn’t realized it had been so long since I updated it. 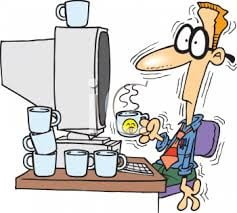 In truth, life has been mad since the start of the year, with so much going on in my day job. you see, when I’m not being a sculpting geek I work as an insurance consultant (definitely not a geeky occupation at all!!!!). normally, this is a pretty slow moving industry (as anyone who has ever tried to make a claim will testify), but this year there has been a huge influx of legislation in the UK which changes the way the industry has worked for over 100 years. All this on top of my normal (busy) day to day workload, trying to plan (and pay for) a wedding in September and not letting it all affect my home life with Sprout and TLC……. yep, it’s been little a bit of a crazy juggling act and no mistake.

That’s not to say that I’ve been idle, where I have been able to grab an hour here and there I’ve pushed a little putty around, started painting a few miniatures (even though I hate painting – mainly because I’m rubbish at it), had a lot of figures cast up and even dipped my toe in the world of digital sculpting.

I’ll split this update into three parts, Sculpting, Cast Miniatures and Digital Sculpting to break it up a bit (and save you from a very long blog post, dear reader), OK then, enough of the excuses…….

As it’s been such a long time since I updated this blog, I’ll try to put these in chronological order…..

OK, first up, at the end of last year I finally got around to finishing of a Christmas sculpt of “Mad Santa”, if I ever get around to selling some miniatures, I was planning on making him a free Christmas giveaway. 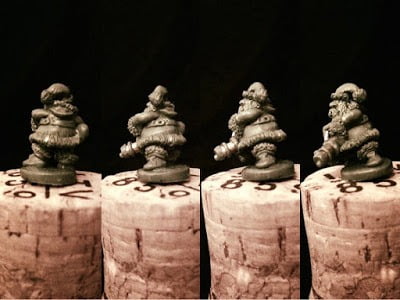 Next up, you may recall my last post was an offer to sculpt 15mm versions of your role-play characters (see here) – well, I had a couple of people wanting this (and an awful lot of abuse/trolling, but I won’t go into that !!) – I finished them off quite quickly, but,of course, had to sculpt enough other miniatures to fill the mould. This took a while, but I finally got the back from the caster, and they look quite nice – albeit a few issues here and there (See Part 2: Casting)

Well, I decided that I could speed up my sculpting schedule (and avoid scale creep, get more consistent body sizes etc)  if I produced a set of 15mm “dollies”, rather than making a new armature each time I wanted to make something new. To this end I made some standard 15mm armatures to go into the mould. I also included a range of weapons and accessories that I could use to help keep the feel of the miniatures consistent.

I also did a very quick sample of an early power armour equipped solider I had had in mind for a while. Equipped with a Gauss Rifle and wearing Power Assisted Counter-pressured Exoskeleton (P.A.C.E) armour, he is ready to take on any marauding alien horde…..

I also realised that, between travelling, day job work, home life, commissions, competitions etc I had been neglecting my near future/high fantasy project (the main reason I started sculpting 15mm scale in the first place), so I took a couple of the miscasts that I had from last time and made a few conversions, ready to go into the next mould – these are a few variants of the dwarves I sculpted back in 2014 (shown with some of the original greens).

And here are a few of the orcs from the same casting run……. 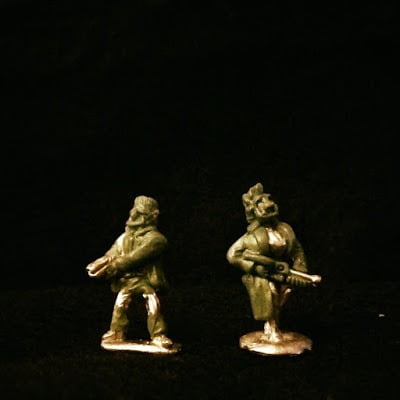 I have some more orc conversions I’ve been working on, but they are still very much in the WIP stage, as are a couple using my new dollies and weapons, so I’ll put them up in a later post. However, I did get around to sculpting a new orc miniature (after watching the top 50 countdown of the best 80’s pop videos – solely for inspiration purposes, obviously!!) – I quite like the way she turned out….

I’m hoping most of these will go into the next mould (I may need two, one for the dwarves and one for the orcs), so will soon see the light of day – we will see (weddings and children ain’t cheap!!)

I’ve also been doodling away with a bit of Bessputty – Some of you may remember I tried this for the first time last year and was very, very impressed. It’s a polymer clay so does need baking in the oven and cannot go straight into a vulcanised mould (which is a shame, and the main reason why I’ve not had these sculpts cast up yet – I will, promise….)  Again, in order of appearance……

being the sentimental, nay romantic, fool that I am, when I was hit with a touch of sculptors’ block a while ago I decided to try to break the voodoo by sculpting a bust of TLC, you see,my lovely finance has a real thing for old movies, and in particular actors and actresses from Hollywood’s golden era of the 30’s and 40’s and I figured that I would try sculpting her likeness as an actress from the period.
Sure, it’s not perfect , and is not a patch on the real thing. However, I thought I’d post it up as it wasn’t as monstrous as it could have been.
I also finished off my brother’s (Boo) GURPS character (you may remember that I’m a bit of a role-play fan – I know, who would have thought it!!)…..

…. As well as another marine (this time in a close assault suit)

Whilst I’m talking about Sci-fi, I also did a version the the P.A.C.E armour in beesputty – although he is still in the WIP stages, I hope you get the idea (I prefer this one to the greenstuff version above – just need to stick some legs on him!!)

Again, remaining with the Sci-fi theme, this is another of the “Street Freaks” that I’ve been playing around with for a while – this is intended to be a range of civilian low-life’s – the sort of people you’d find hanging around a star-port in the early hours of the morning….

This one is “Drunk Willy” a asteroid prospector who immediately drinks the profit of any discovery that he makes.

I had, already competed the Space Bum – pan-handling his way across the galaxy from spaceport to spaceport, so you can see the sort of idea I’m going for…..

And, of course, not to leave near future/high fantasy completely unrepresented in the beesputty pile, I quickly finished off this sculpt, an orc brothel madam. Complete with cyber “enhancements” to deal with any “tricky customers”

wow, if you are still here at this stage well done (no, seriously, congratulations, it’s a bit of a slog….). But I figured it would be wrong to sign off without showing you a few more photos. These were the product of me working too hard (don’t laugh, it’s true) late one night a few weeks ago. I took some photos of some of the miniatures I had cast up last year and had painted and photo-shopped them into a couple of dystopian future backgrounds I found on the internet, it was a good way to wind down for an hour or so. Hope you like them….

Anyway, that’s all for now, see you (hopefully) in Part 2.

’til then, all the best