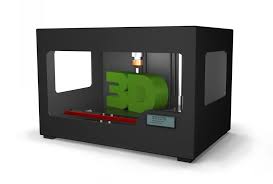 Well, the end of this three part update anyway (queue sighs of relief).

Anyway, over the last two posts, I’ve looked at the sculpting I’ve been doing since the start of the year as well as some of the figures I had cast up to fill the space in the moulds I used to cast up my new armature dollies.

Part 3 is a deviation from what I usually do. You see, a few weeks ago, whilst I was waiting for the casts to arrive from the workshop I was feeling a little bored. I had finished off most of my WIP’s (and didn’t really feel like starting anything new). I had come across some comments online about various free digital sculpting software and thought, “well, why not!!”

You see, this is something very new to me. In truth (and despite my lack of years) I’m a bit of a “techno-tard” (as I believe the politically correct amongst you say) – I can barely work a DVD player, I use a PC (just) but have no idea how they work and most of my phones functions remain a mystery to me. As such I’ve always steered away from this medium in favour of the old school putty method.

Anyway, I downloaded a couple of free programmes and set to work playing around with the functions. First thing I noticed was this is a really steep learning curve – I mean, I was expecting it to be tricky, but this was vertical!!!!! (I guess I could have read the tutorials/instructions, but hey, who does that!!). In the end I plumbed for Sculptris for organic shapes and Meshmixer for hard edges and mechanical shapes (I did try Blender, but it’s just way to complicated for my tiny, tiny brain after a long day in the office).

It took a day or two (including an awful lot of reworking, and a bucket load of new and imaginative profanity) to come up with something even resembling a miniature, but for a first try I was quite pleased (I did do some further work on him, redoing to wrinkles on the legs, removing the hand blades etc – I just don’t have photos to hand).

Now, some of you might recognise the inspiration for this chap – Whilst not a patch on the original artwork (by Jeff Laubenstein – I think) I liked it.

But, now I had it, what was I to do with it? Well, I uploaded it to Shapeways (I know there are better services out there, offering better materials – including, so I hear, materials that can go straight into a vulcanised mould – for people who know what they are doing, but they are very easy to use and do all of the checks for you), picked a material (which honestly wasn’t hard since it was the only material for which the file passed the tests) and waited for the print to arrive.

This was the result, the material was quite smooth, with very little additional cleaning required and it took paint very well.

Here he is painted and scaled to a 15mm Irish Hit Man from Rebel miniatures. 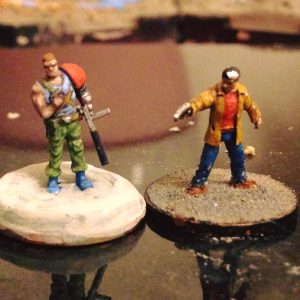 So on the same theme, I quickly did another version (for the main body of this one I “Rigged” a figure in Blender to get the stance I wanted – Which, whilst I’m sure if you know what you’re doing is an easy process, for me, it’s something I would happily never do again…… ever!!) 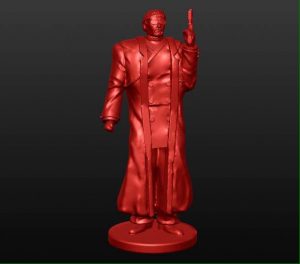 Again, the original artwork which formed the inspiration for this one.

So will I do it again? maybe, it’s certainly different and the results are not too bad (even for a complete flump like me). However, the results just do not really fit in with my sculpting style….. It took me a while to work out what was wrong, you see, it’s in scale!!!! In most of the sculpts I do, certain body parts are very overstated (particularly the head and hands – I believe that this is quite common) and whilst it’s not something that I tend to notice when comparing two hand sculpted miniatures, it’s really apparent when I compare the printed miniature against some of the traditional ones.

Still, it was good fun and an interesting was to spend a day of two after work.

That’s us all caught up….

thanks for reading, have fun